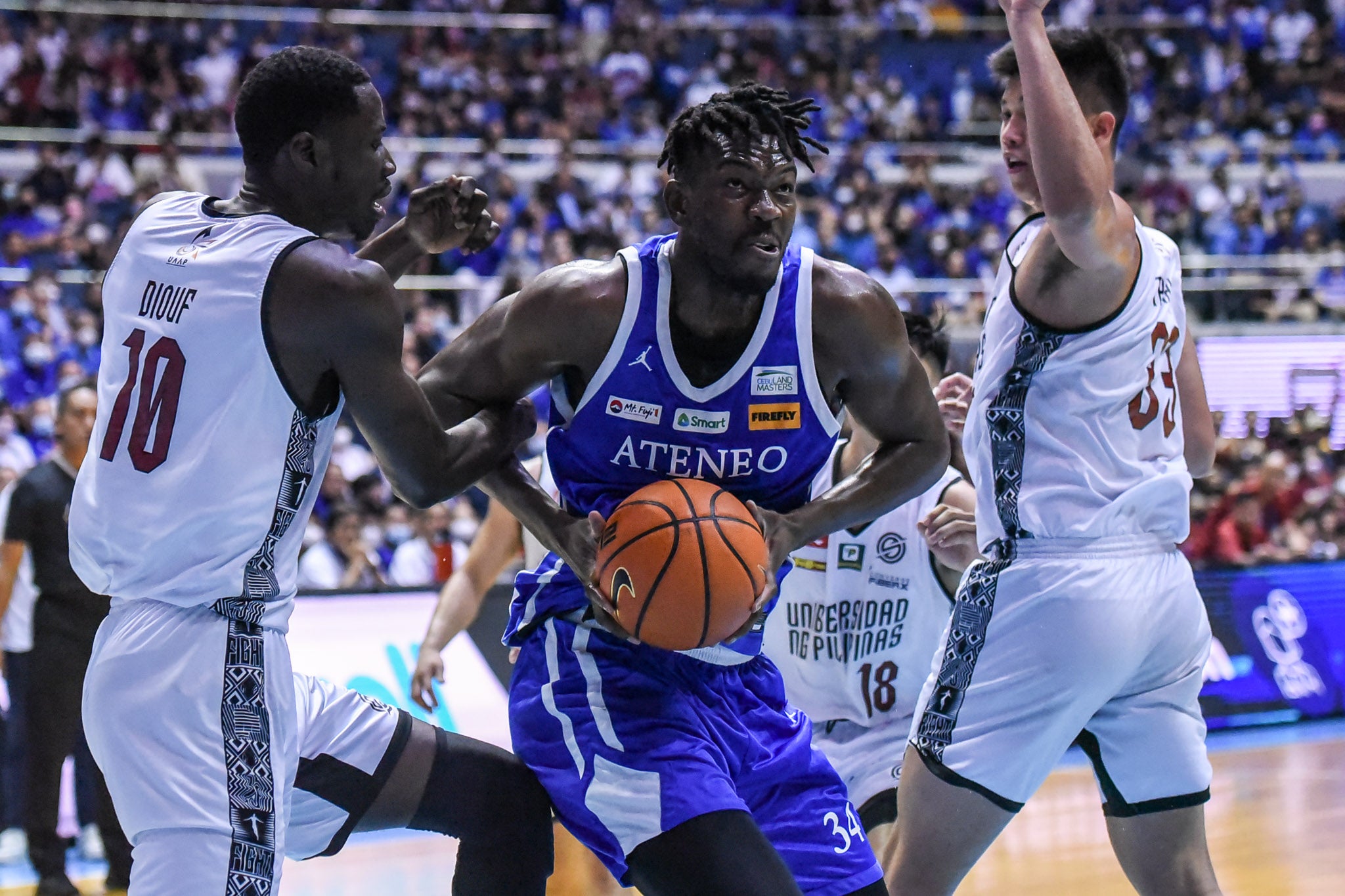 MANILA, Philippines—Ateneo gingerly traveled the road to redemption strewn with obstacles throughout the season that the Blue Eagles cautiously removed one after the other.

With one big fight on Monday night, they finally got rid of one last hurdle and undoubtedly the biggest of them all by defeating the UP Fighting Maroons, 75-68, to reclaim the UAAP men’s basketball crown this Season 85.

The Blue Eagles leaned on one huge scoring spurt early on and weathered a late charge by the Maroons to wrap up their best-of-three series in an electrifying Game 3 atmosphere with the glitzy trophy in their hands.

Ange Kouame completed a three-point play with one minute and 48 seconds left and swatted away Carl Tamayo’s shot in the next sequence that burdened UP’s comeback effort.

The sealing free throws. The buzzer. The moment.

Harold Alarcon’s off-balanced three following his split from the charity stripe gave the Maroons some solace as they cut it down to three, but BJ Andrade’s freebies in the dying seconds secured the win, sealing Ateneo’s date with destiny and the school’s 12th UAAP title overall.

While the full house Ateneo faithful were ecstatic and stayed on to celebrate the feat, the UP crowd slowly made a beeline toward the Araneta Coliseum exit, heads bowed and dejected.

Redeeming themselves from that classic Game 3 finals setback last season, the Blue Eagles now captured four of the last five UAAP titles while denying the Maroons a rare feat of winning two consecutive championships in the same year.

Five threes by Ateneo in the opening quarter allowed the Blue Eagles to pull away early, 30-12, as the Maroons couldn’t get things going.

Ateneo’s punishing defense was obviously the culprit. It forced the Maroons to launch their shots uncomfortably, clanging the rim majority of the time.

Carl Tamayo’s timely incursions revitalized UP and pulled them within nine, but a stunning three by the 6-foot-11 Geo Chiu and a Padrigao floater after eluding JD Cagulangan with a crossover pushed it back to a 15-point Ateneo advantage at the half.

It was the first time UP lost back-to-back matches in 36 games under coach Goldwyn Monteverde. UP seized the series opener and seemed headed for a sweep, but the Blue Eagles came storming back with a methodical Game 2 win.

Zavier Lucero’s absence was a big letdown for the Maroons, who visibly missed the 6-foot-7 forward’s heroics on the floor.

Lucero tore the ACL in his left knee in a no-contact injury in Game 2 when the Blue Eagles leveled the best-of-three series, sending them both to a winner-take-all.

Reduced to cheering his team, Lucero watched from the bench helpless, he could do nothing to stop the Maroons from being shredded into bits.

Padrigao and Anton Quetevis made it a 20-point spread before UP chopped the lead down to six highlighted by a two-handed slam by Henry Galinato and James Spencer’s explosive three.

A four-point swing on the free throws of Vince Gomez and Kouame and triggered by an unsportsmanlike foul by Cagulangan near the end of the third put Ateneo back in the comfort zone.