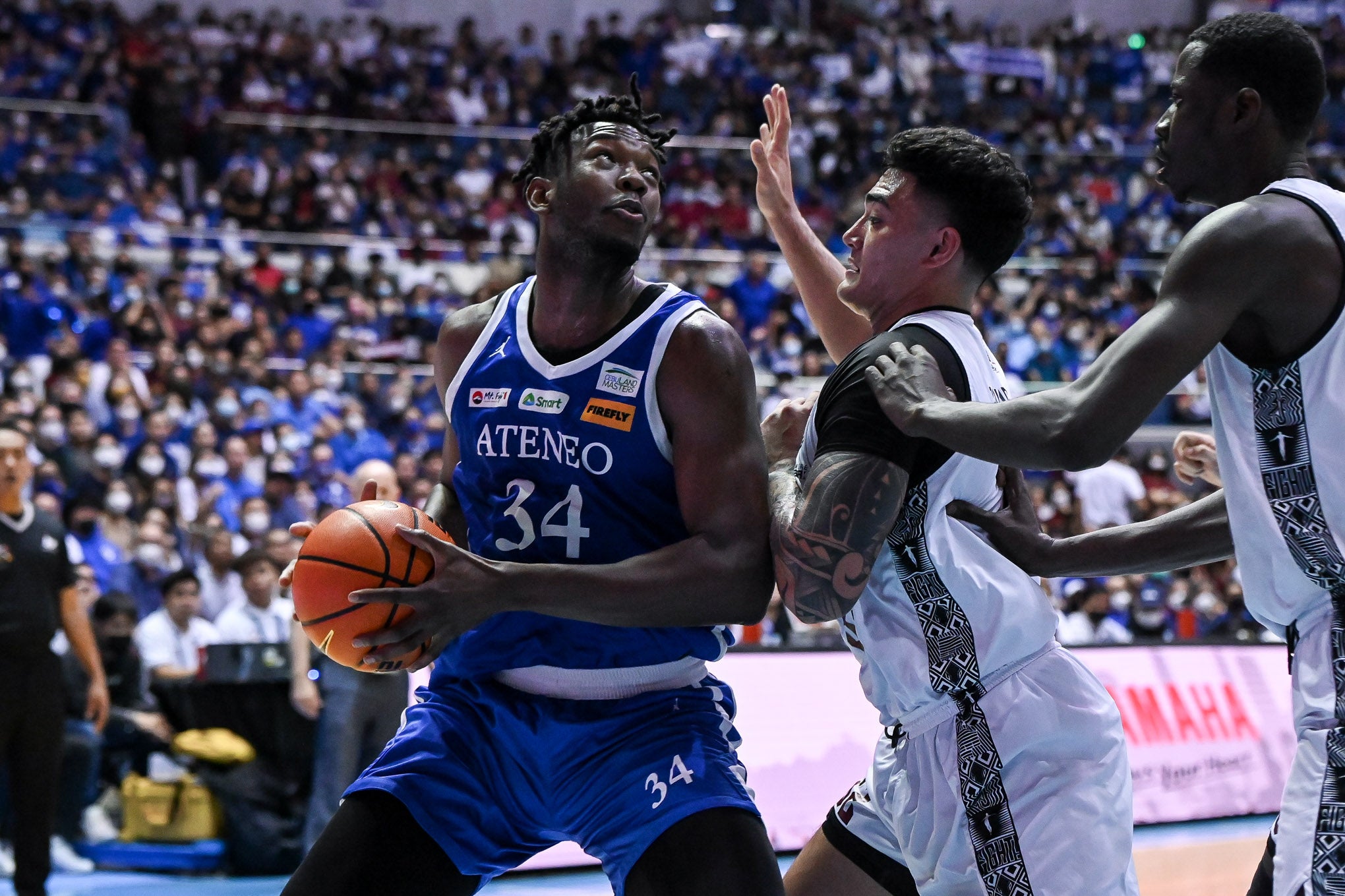 Ateneo won the biggest fight of all—at least, for this season.

Going on a strong tear to start the game, the Blue Eagles weathered a late desperate charge by the University of the Philippines (UP) Maroons to forge a 75-68 victory and retake the UAAP men’s basketball crown from the defending champions.

Ange Kouame finished with 19 points 12 rebounds and four blocks and Ateneo fully capitalized on the absence of UP’s key two-way stalwart, Zavier Lucero, to open up the game with five triples and a 30-12 start to seize control of the deciding Game 3 at Smart Araneta Coliseum.

“This means a lot to me because nobody believed in us; even we didn’t believe in us in the start. But coach Tab [Baldwin] is the man and we just followed his lead,” said the 6-foot-10 naturalized Filipino, who was named Finals Most Valuable Player after averaging 17.7 points, 11.0 rebounds and 3.0 blocks in the series.

Kouame, who had nagging injuries all season, also scored a key three-point play and swatted a Carl Tamayo attempt to hose down UP’s last stand and help the Blue Eagles reclaim the throne that they ceded to the Maroons last season.

“The pain is just mental, it’s just in the mind. When I go home tonight, it will still hurt. Thanks to the Ateneo community. Ateneo this is for you,’’ Kouame said.

Ateneo thus bagged its 12th UAAP men’s basketball crown continuing a domination of the tournament that has spanned the last two decades.

“We are just very blessed that we won it this time. It’s about the players. I’m proud of them and I feel blessed to be working with them,’’ said Baldwin on his fourth UAAP title with the Blue Eagles.

BJ Andrade’s freebies in the dying seconds, however, secured the win.

While the full house Ateneo faithful were ecstatic and stayed on to celebrate the feat, the UP crowd slowly made a beeline toward the Araneta Coliseum exit, heads bowed and dejected.

“Those guys. Those guys right there, those people right there, and the support of the Ateneo people worldwide. A great start to the game, a great first half, and we weathered the storm,” said Baldwin.

Redeeming themselves from that classic Game 3 finals setback last season, the Blue Eagles have now captured four of the last five UAAP titles while denying the Maroons a rare feat of winning two UAAP basketball championships in the same year.

Tamayo sparked a rally that cut the deficit to nine in the first half, but a big three by the 6-foot-11 Geo Chiu and a Forthsky Padrigao floater after eluding JD Cagulangan with a crossover gave Ateneo a 47-32 lead at the break.

It was the first time UP lost back-to-back matches in 36 games under coach Goldwyn Monteverde. UP seized the series opener, but the Blue Eagles came storming back in Game 2.

And even worse for UP, Lucero went down in Game 2 on a noncontact play and ripped his left knee ACL. The 6-foot-7’s absence created a void on both ends of the floor that UP could not fill.

Lucero cheered from the bench helpless as his team took a beating. UP gave Lucero a proper sendoff, though. The graduating forward, who was in uniform, checked in and made a technical free throw with 0.7 seconds remaining. INQ