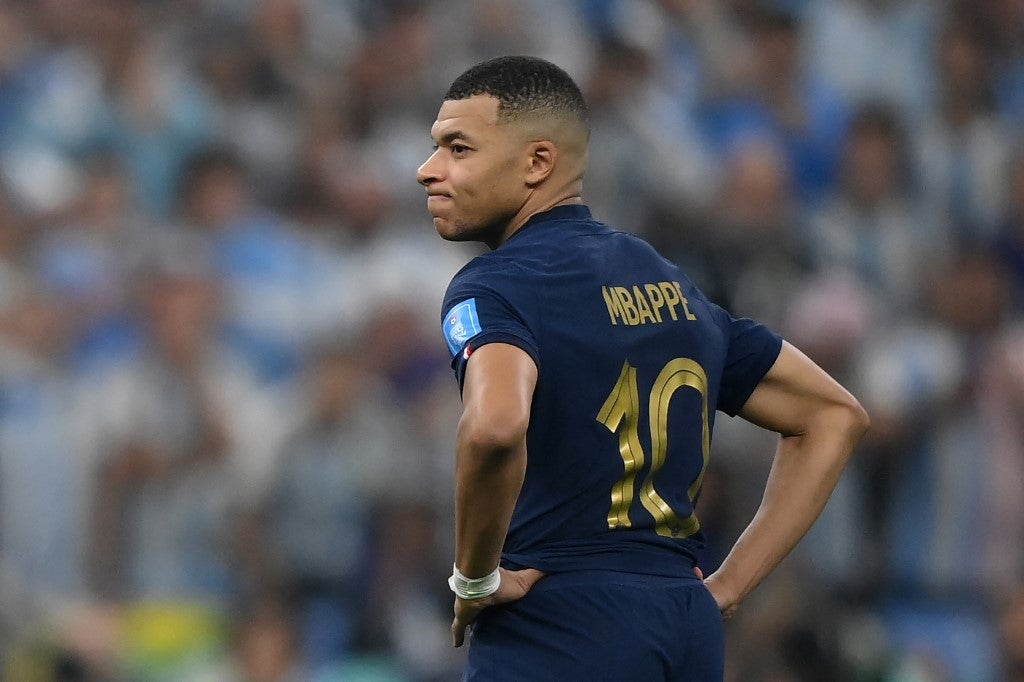 France’s forward #10 Kylian Mbappe looks on during the penalty shoot-out of the Qatar 2022 World Cup football final match between Argentina and France at Lusail Stadium in Lusail, north of Doha on December 18, 2022. (Photo by FRANCK FIFE / AFP)

Kylian Mbappe was unlucky to finish on the losing side as Argentina defeated France on penalties in the World Cup final, but the 23-year-old showed on Sunday why comparisons with Pele are not unreasonable.

The Paris Saint-Germain forward scored only the second hat-trick in World Cup final history but his bid to become the youngest two-time winner since Pele in 1962 ended in heartbreak in Qatar.

Mbappe, who turns 24 on Tuesday, is just the second man to score in back-to-back World Cup finals and finished as the tournament’s Golden Boot winner with eight goals.

Reduced to the role of a passenger for much of the game, Mbappe burst into life 10 minutes from time with two goals in the space of 97 seconds to bring the reigning champions back from the dead.

A peripheral figure as Argentina swept 2-0 ahead, Mbappe buried a penalty past Emiliano Martinez and then equalized soon after with a sublime first-time volley low into the corner following a brilliant exchange with Marcus Thuram.

Just when it looked all over for France as Lionel Messi struck again in extra time, Mbappe nervelessly smacked home his second spot-kick — joining England’s 1966 star Geoff Hurst as the only other man to score three times in a World Cup final.

And while it was Messi who gleefully hoisted the World Cup trophy — eight years after the bitter pain of losing the final in Brazil — Mbappe is erasing any doubts as to who will succeed him and Cristiano Ronaldo as football’s new superstar.

He is already up to sixth on France’s list of all-time top scorers with 36 goals, one behind Karim Benzema — the Ballon d’Or winner whose absence in Qatar was mitigated by the brilliance of Mbappe.

Only Brazil’s Ronaldo has scored as many times at a single World Cup over the past half-century. His 12 goals at the finals before the age of 24 have shattered Pele’s previous record of seven.

His record is identical to the Brazilian legend’s tally from four World Cups, placing Mbappe already sixth on the all-time list.

Mbappe emulated Vava, who scored in both of Brazil’s wins in 1958 and 1962. His four goals in World Cup finals are now also the most in history.

Mbappe will still be just 27 at the next World Cup in 2026, a once-in-a-generation talent with a burning desire to soothe the pain of an agonizing defeat in Doha.

“Many players broke records at this World Cup and Kylian has really left his mark,” said France coach Didier Deschamps.

“Unfortunately he didn’t leave it the way he would have wanted to and that’s why he was disappointed at the end.”

Mbappe has scored 253 times in 363 games for club and country, a tally that far exceeds those of Messi and Ronaldo at the same age.

While Mbappe was engineering a thrilling France comeback, Pele was watching from his hospital bed thousands of kilometers away in Sao Paulo as he battles colon cancer.

“I’m happy to see you breaking another one of my records in this World Cup, my friend!” Pele replied after Mbappe sent his well wishes earlier in the tournament.

Mbappe has elevated his game to new heights over the past month, earning himself the right to one day perhaps be included in the same conversation as Pele, Diego Maradona, Messi and Ronaldo.

“The king will always remain king,” Mbappe said after scoring in France’s 4-2 win over Croatia in the 2018 final, but he is very much the jewel in France’s crown — and time is on his side.