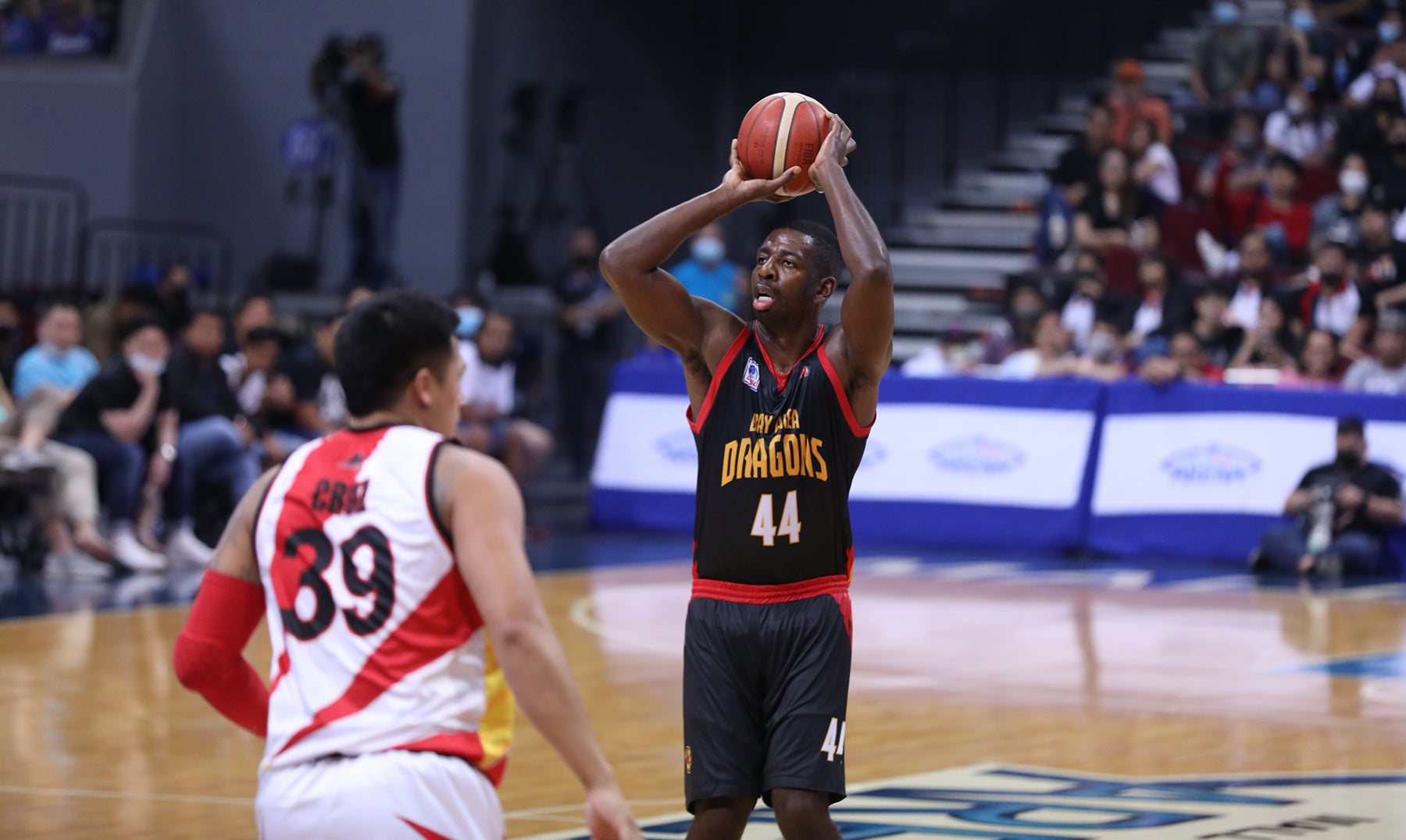 Coach Brian Goorjian made sure he talked to both Andrew Nicholson and Myles Powell before the three headed to the locker room and celebrate the Bay Area Dragons’ entry to the Philippine Basketball Association (PBA) Commissioner’s Cup Finals.

Goorjian pulled the two imports aside and thanked for their contributions in making the Hong Kong outfit only the third foreign team to reach the big league’s grandest stage.

“I just wanna thank them,” Goorjian later told scribes who witnessed the trio’s huddle following the Dragons’ 94-92 semifinal series clincher over the San Miguel Beermen on Wednesday at Mall of Asia Arena in Pasay City.

The discussion somewhat raised speculation if Bay Area would make the switch for the championship series which starts on Christmas Day, after Nicholson suited up during the playoffs due to Powell’s injured foot.

But Goorjian was quick to shut down such notion.

“[It will be Andrew Nicholson] the whole way,” Goorjian said.

Goorjian ruled out any chance of a Powell comeback until the East Asia Super League (EASL) in March 2023, saying that it will take six weeks plus rehab for the spitfire guard to make a full recovery after suffering a tear on his toe.

But fans have been speculating of a possible Powell return, with some on social media suggesting that the high-scoring 6-foot-2 American, who won all eight games when he donned the Dragons jersey, may be faking an injury.

“Why (expletive) would I walk around with a boot for [a] ‘fake injury,’” Powell said, reacting to a netizen who commented on a video on the Inquirer Sports’ Twitter account that showed him firing a few jump shots while in a protective boot during pregame warmups.

“… You keep tweeting fake injury. (Expletive) and get a life,” he later added.

Bay Area’s guest participation in the midseason conference has not only been impressive but also complicated on the Dragons’ part due to the import situation.

The Dragons had tapped Nicholson and Powell with the original intent of having the two play together in the EASL, which was supposed to be a home-and-away tourney set for an October start before it was pushed back and reduced to a week-long event in Okinawa, Japan.

The PBA participation originally served as an EASL warmup, with arrangements allowing for Bay Area to field just one import. The Dragons eventually made Powell play the first four games of the eliminations, Nicholson the next four. They settled for Powell during the latter stages.

Powell’s injury allowed Bay Area to bring back Nicholson for the quarterfinals and semifinals under an arrangement made with the league, different from PBA rules which only allows its member teams to bring back original imports during the course of the tournament.

“Those two being the people they are, this (making the Finals) would have never happened,” Goorjian said. “I never had a situation where imports are able to handle what those two have handled, being here for five months sitting and not playing and working their ass off. I’m just really proud of those two.”

Powell, as mentioned, never lost on the floor and could have been a strong candidate for the Best Import if Bay Area players are eligible for any individual award. He averaged 37.3 points, 8.4 rebounds, 3.0 assists and 2.0 steals during his eight-game stint.

Though not as an explosive of a scorer as Powell, the 6-foot-10 Nicholson has showed that he can be a main offensive weapon while providing the things big men usually provide, as seen with his averages of 36.2 points and 13.3 rebounds in nine games.

Nicholson had 42 points and 21 rebounds when the Dragons closed out the Beermen to set up a date with the Gin Kings, who gave him a rude welcome via a 111-93 rout, Bay Area’s first loss here, last Oct. 9 at PhilSports Arena.

Another subplot is Nicholson’s attempt to atone for that defeat and equal what Nicholas Stoodley—a team composed of American players—in the 1980 Invitational and the late coach Ron Jacobs’ Northern Consolidated in the 1985 Reinforced Conference did when they won championships as guest teams.

“Looking forward to it,” said Nicholson.