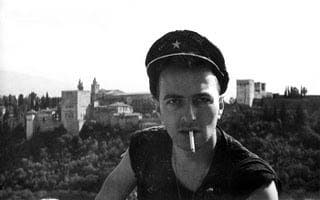 TODAY (December 22, 2022) marks the 20th anniversary of punk legend Joe Strummer’s death. He died just a few months after celebrating his 50th birthday with Paul Weller and Damien Hirst in a tiny Spanish village that had captured his love and where he had a holiday home for many years.

His links to Andalucia were close – he loved the region and the locals still love him.

So much so that in 2015 he was given the honour of having a square named after him in Granada, following a campaign by local residents.

More than 2,000 residents of Granada, where The Clash front man was a frequent visitor, signed a petition calling for him to be honoured.

The singer’s widow, Lucinda, and daugther, Lola, (pictured below) unveiled the Plaza de Joe Strummer at a ceremony in 2015.

Strummer, who name-checked the city in legendary London Calling album track Spanish Bombs, died from a rare congenital heart condition at his home in Broomfield, Somerset.

The Olive Press first reported the story in 2011 and joined scores of fans and city leaders in Granada in the campaign to honour the musician.

The local hero first went to the city in the 1970s with Spanish girlfriend, and drummer of the all female punk band the Slits, Paloma Romero.

His first visit to San José on the rugged Cabo de Gata coastline in Almeria was in 1985, after being persuaded by his girlfriend to take a break from partying in nearby Granada.

He spent many summers there and celebrated his 50th in August of 2002 at Bar de Jo with his celebrity pals in the nearby fishing village of Los Escullos.

Indeed, so popular was Strummer that the bar held an annual tribute party on Joe’s birthday until it closed five years ago.

And in 2015 the love the local people of Granada and Almeria had for Strummer was confirmed by the naming of a square after him.

At the time, Daniel Galan from Granada City Council told the Olive Press: “The initiative came from a neighbourhood association, backed by some political parties and was approved.

“It was a popular movement. It is very well known the connection between Joe and the city and people still remember him.”

He added: “He loved Granada, he loved the whole of Spain but he had a very good connection with Granada because he was friends with local group 091.”

The city of Granada has since been a melting pot of alternative music, with hundreds of local bands citing 091 and Strummer as influences.