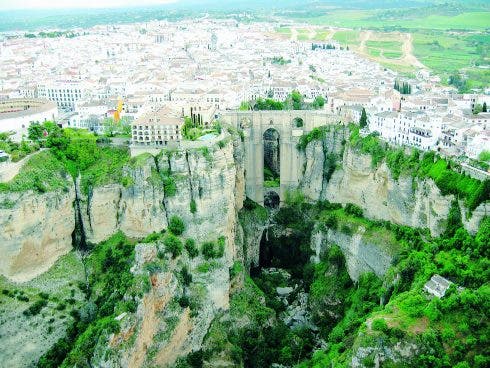 IN a tiny back street, a torero’s cape length from the town’s famous bullring is a spit-and-sawdust bar that perfectly typifies Ronda. Nothing more than a hole-in-the-wall, Porton is where you can best understand what makes this historic gem tick.

Run by Javier for the last 40 years, this authentic place is usually crammed full of locals at lunchtime, nestling a cana or brandy, as they scour the local paper or browse the midday news.

Here, you will find my favourite Ronda tapa, the wonderful quails egg with a slice of Jamon Iberico on toast.

Washed down with a glass of fino and a snippet of banter, you are watched from all corners by a cornucopia of bullfighting photos and keepsakes, collected over the last century.

A guaranteed feel good factor, it is only matched around the corner at the town’s most historic restaurant, Pedro Romero, where the collection of bullfighting memorabilia is perhaps more worthy of museum status.

No surprise really, it being named after the matador that founded modern bullfighting and went on to build the bullring opposite.

A classic family restaurant, nearly half a century old, it is run by brothers Carlos and Tomas, while their 87-year-old father regularly pops in and their kids put in the odd shift.

As you might expect, this is where to find the classics, dishes such as carrillada (bulls cheek) or rabo de toro, oxtail, which is the best in town.

Nearby, you will find the exciting new restaurant, Carrera Oficial, meaning ‘finishing line’ and named after the spot where all the famous Semana Santa Easter processions end.

Opening this year in a wonderful old townhouse, it has been beautifully renovated, keeping its ancient beams and doorway, with its original family crest.

Set up by Ronda’s very own Dani Garcia (not to be confused by the Marbella wunderkind, who once ran the Michelin-starred Tragabuches in the town), it is a real delight, mixing creative dishes with an excellent wine list.

Having worked at a nearby hotel for 17 years, Garcia finally made the move into his own place, wanting to be ‘more adventurous’. And he’s certainly proving to be different, with an excellent mix of tapas dishes, as well as original mains.

I particularly liked his avocado salad, which was as fresh as it could be, while a tapa of Arabic-style Moruno lamb was handled well and came served with a baked cherry tomato and a fried green pepper.

Looking for real creativity you will need to head 100m up the road to Bardal, which was previously the home of Marbella’s Dani Garcia and his infamous Tragabuches joint.

But forget about Dani, Bardal is a hundred times better and well worthy of its two Michelin stars, with a third surely set for 2023.

All thanks to Benito Gomez, a whirlwind, who arrived from Catalunya a decade ago, having done his time working for one of the godfathers of Spanish cuisine, Ferran Adria, both at El Bulli and at its sister restaurant, Hacienda Benazuza, in Sanlucar la Mayor, near Sevilla.

Few people are as passionate for Ronda’s amazing local ingredients that, due to its geography, include amazing vegetables, mushrooms, ham, cheeses and meat.

I’ve known Benito since his early days in Ronda (at Tragabuches) and even tried his food at Benazuza two decades ago… a 25-course four-hour masterclass, for just 99 euros, that I still remember and count as one of the best meals of my life.

Now firmly settled in Ronda with a local wife and a second diffusion restaurant, Tragata, near the Parador, a little bird tells me he will move to a new, greenfield location in the new year, a place that ‘will completely blow your mind’. Watch this space.

Another foreign foodie talent, who is more than settled now in Ronda is Martin Abramzon.

Also a former head chef at Tragabuches hand, this friendly Argentinian is pulling diners from miles around to his stylish spot, Kutral, a most unusual place in Ronda’ industrial estate.

Creating the coolest restaurant in town, his parilla-style dining centres on the best cuts of meat the country can offer, while also offering some excellent local vegetable dishes. And don’t miss the amazing empanadas and the lemon curd pudding.

A well travelled chef, who likes to taste new dishes, it is no surprise he trained with Spanish legend Martin Berasategui and has cooked for many celebrities, including Gareth Bale and Cristiano Ronaldo.

Another three-star Berasategui trainee is Jose Antonio junior at Tropicana, which was recently voted Spain’s top restaurant by Trip Advisor. Yes, ‘Number One for Best Everyday Dining in Spain’ and tops for all round good quality, great local restaurants.

It is an amazing accolade and he and his father, Jose Antonio senior, have done an amazing job turning this place into yet another ‘must visit’ joint in Ronda.

The father and son team deliver a great range of carefully considered dishes – many vegetarian and gluten-free – focusing on local ingredients with lots of small twists.

Meanwhile, the decor is stylish, while the impeccable service has given it a great reputation among tourists.

And there are even more talents around in Ronda, with seasoned chef Javier Pimentel at El Almacen, having trained at San Sebastian’s legendary Akelarre, as well as working in Ireland, London and San Sebastian, before opening in Ronda.

It’s a stylish spot, always busy, with a great selection of music, including a huge pile of records, thanks to his girlfriend, who is the Maitre. But you are here for the food and the dishes change regularly and almost always have twists.

For wine lovers you mustn’t miss Entre Vinos, which has over 100 wines from Ronda, with more than a dozen wines available by the glass. There are some excellent tapas and it’s a charming place to while away a few hours.

Just up the hill is Siempre Igual, which is exactly that ‘Always the same’, it’s a bloody excellent place to enjoy tapas and some excellent wine with friends. Run by a friendly family team, they always have some experimental new dishes, worth a try and in a great location, just up from the bullring.

Down in Barrio San Francisco, a charming part of the old town, Cerveceria Bandolero, could be the friendliest place to eat in Andalucia.

It’s very much service with a smile from these two cousins, who run backwards and forwards charming guests and plying you with excellent simple and local fare, with a bent towards Carnes a la Brasa.

Over the square seasoned joint Almocabar has been consistently one of the town’s finest places to eat for two decades.

With a superb wine list, great homemade food and atmosphere personified, it has a winning formula particularly if eating in the square outdoors at summer time.

There are plenty more amazing places on the outskirts of Ronda or in its nearby villages.

The classic view of Ronda, is luckily matched by the food, thanks to the hard-working owners Jose Manuel (who also worked at Tragabuches) and girlfriend Rocio, who is often found in the kitchen despite recently having a baby.

Always try and eat on the terrace outside, although it’s lovely inside on a cold, wet day.

Arriate is one of the key spots to head to if you’re looking for inspiration dining.

A long-time favourite is run by talented Dutchman Frank Rottgering, next to the charming old railway station.

Called El Muelle, regulars drive all the way from the coast and even Sevilla to eat, and it’s not hard to see why, it being both charming and atmospheric in equal measures.

Local chef Isa is as popular with foreigners and tourists, as the locals, who love her generous servings and ability to change by the month and always offer specials of the day.

Another exciting new addition to the food scene in Arriate is Los Caireles.

This amazing converted cinema is one of the most original, must-visit joints this winter.

The creation of brothers Roberto and Manolo, who helps out in the kitchen, it is slowly finding its way to being a leading culinary find.

Nothing is left to chance and it’s currently concentrating on great local produce and has a decent wine list.

You will love the vibes; the music and the ambience, surrounded by movie reels, projectors, and posters, not to mention some of the seats, tickets and even adverts shown before the main event.

Even better, the original screen and stage for the Cine Ideal, with its faded paintwork, is still intact out back in a big space, through a set of double doors.

Outside on a wonderful rural backroad from Arriate towards Sevilla you will find Venta Pelistre. Now 70 years old this is the very definition of an Andalucian countryside venta.

Run by the same family since it opened, it sits by a river in the sleepy Llano de la Cruz valley, but is anything but on Saturday or Sunday lunchtime, when the whole world beats their way to its door.

And no surprise, the local food here is not just homemade and delicious, but if you pay more than 25 euros a head, give me a call at the Olive Press and I’ll eat my hat.

Looking for a great place to eat in Casares make a beeline to Sarmiento, where the food really does somehow match the views.

With one of the best vistas in Christendom you might think the food doesn’t matter, but the brothers Miguel and Juan Sarmiento keep working to make sure the kitchen gets better and better.

It is a great return for them with their father first setting up this restaurant in the classic white town three decades ago, before leasing it out to another local family.

The skills they picked up at various five star hotels and restaurants around the world certainly count for something and their restaurant is ‘based on the essential pillars of the Andalucian lifestyle: authenticity, spontaneity and the enjoyment of friends and family’. You can’t argue with that.